Year 6 has been making pieces of art over Shackleton’s journey in the last 2 weeks. Last week, we made the watercolour background, and this week, we have made the 3D mountains to stick on.

This week Hummingbird and Eagle class began to create artwork around the book Shackleton’s Journey which we are also using in English to theme writing on. Can you guess what the final watercolours will depict? See next week for the completed versions. 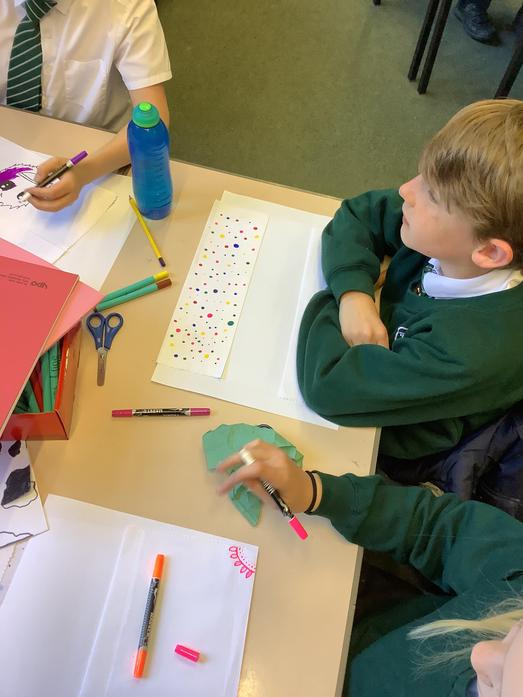 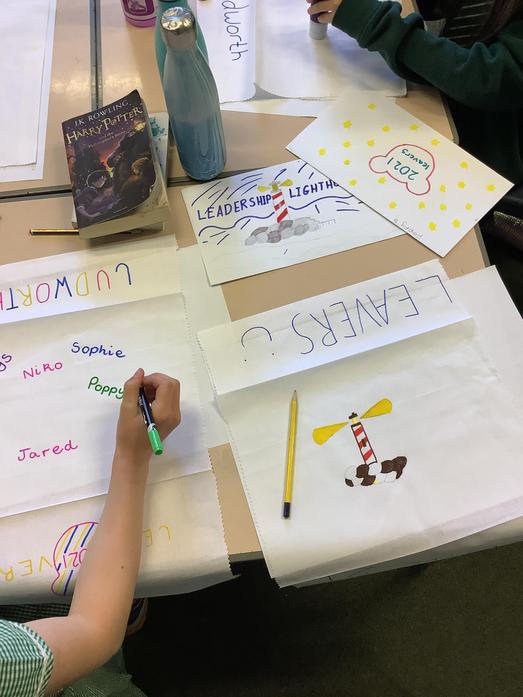 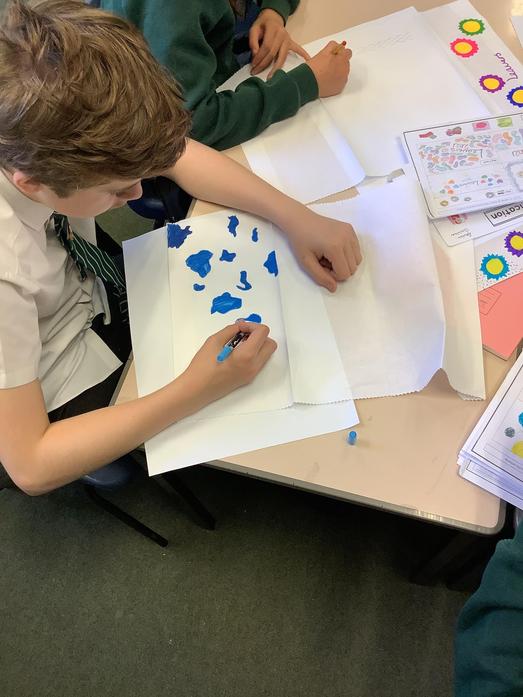 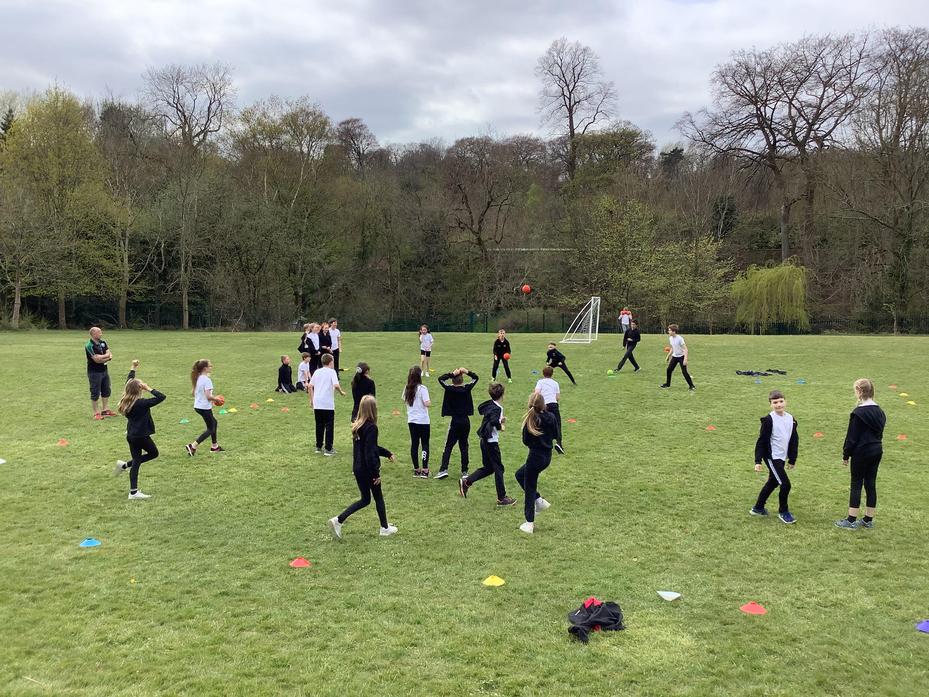 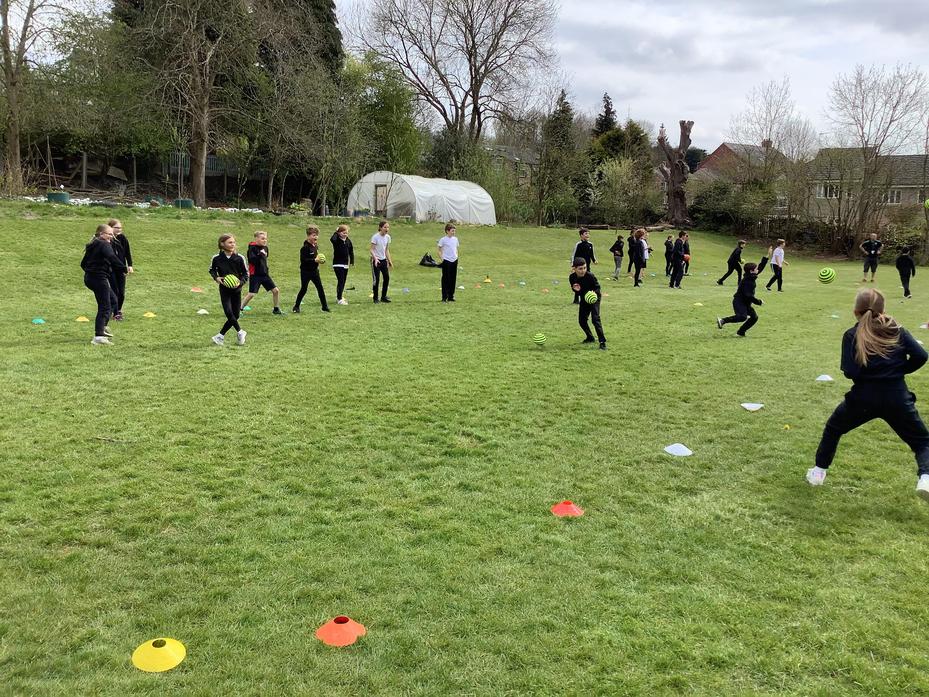 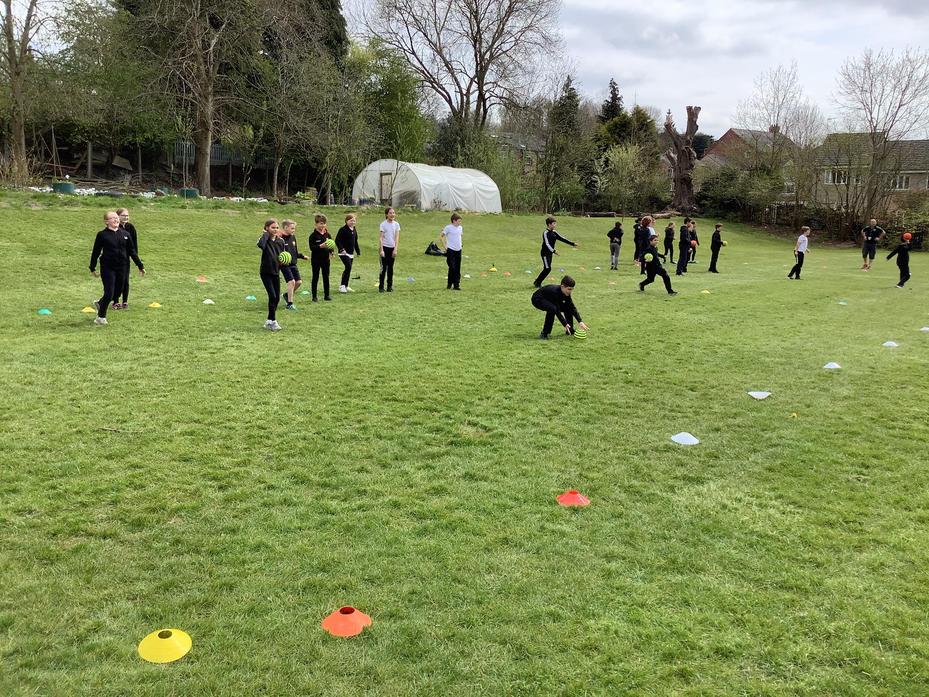 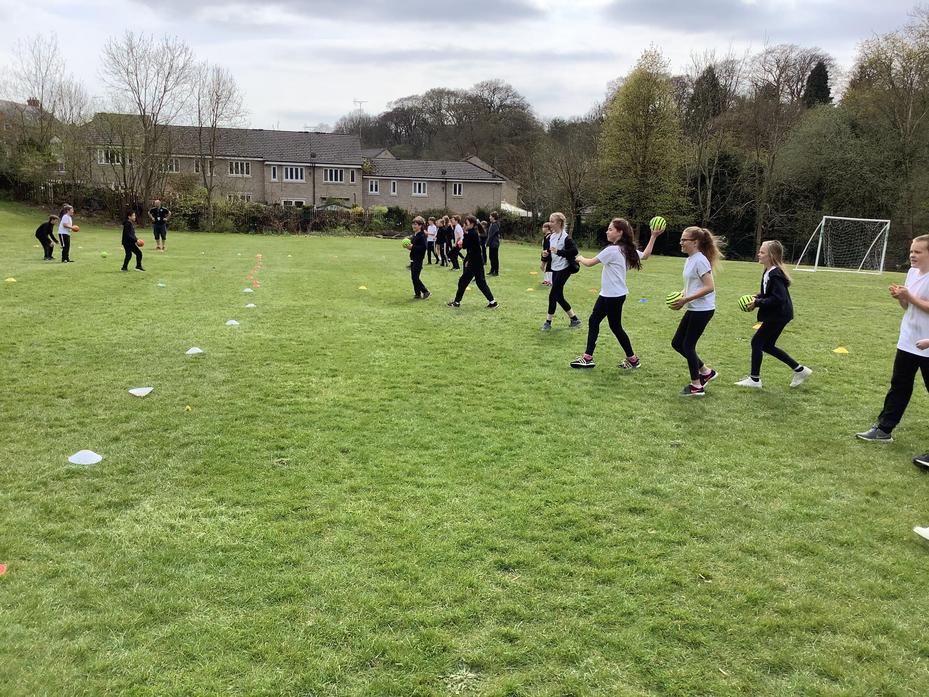 Symbols representing the gift of Easter

We have been celebrating the Christian festival of Easter by thinking about the gift which Mary gave the world in her son Jesus Christ. We thought about which gift we would like to give to the world and designed a symbol to represent that. The symbols were then modelled in clay and painted. Work ranged from, symbols representing the gift of nature and the environment to those of hearts and doves to represent peace and love. We have shared some fantastic ideas.

One Year On, Always in Our Hearts - how we marked the Covid 19 National Day of Remembrance 2021.

To mark this national day of remembrance for Covid 19, Year 6 took part in a whole school commemoration which involved making yellow hearts for all those who have suffered over the past year.  The children also designed positive postcards which will be laminated and displayed in the forest for the children to read over the next few days.  Although it has been a difficult time, the children enjoyed the time to reflect and share their gratitude for positive experiences throughout the lockdown.

A Snapshot in Time

This week in school, children in Hummingbird Class have drawn some positive images reflecting on both the lockdowns. They ranged from pets to cycling to NHS and many more. Last week, we also wrote some letters to our future self, telling them our hopes, what we liked and how tall we were. We had a lot of fun doing it and we look forward to reading them in the future.

In PE this week, the children made full use of the new volleyball equipment to have an inter-class competition. Hummingbirds rose to the challenge but were just pipped at the post by some super Eagle players. It has certainly ignited a new love for the sport!

On Thursday 11th March we did science and in science we learnt about pulleys. In this lesson we used a pulley to move a orange from the table to the floor and from the floor to the table. A pulley is like a cable cart when you go skiing and it takes you up the mountain or down the mountain. 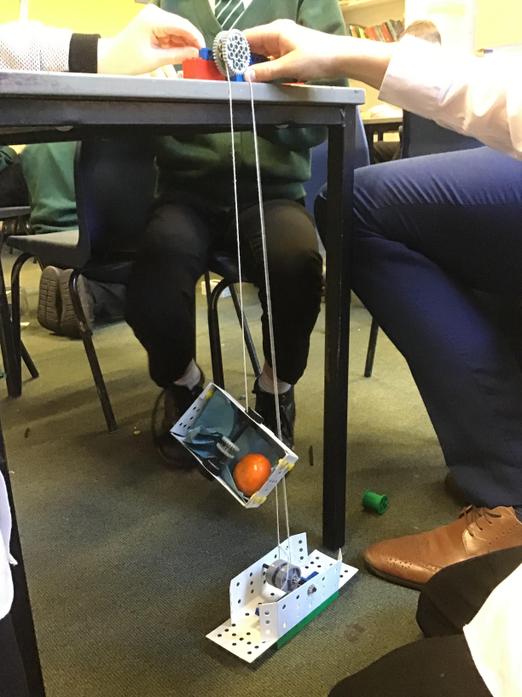 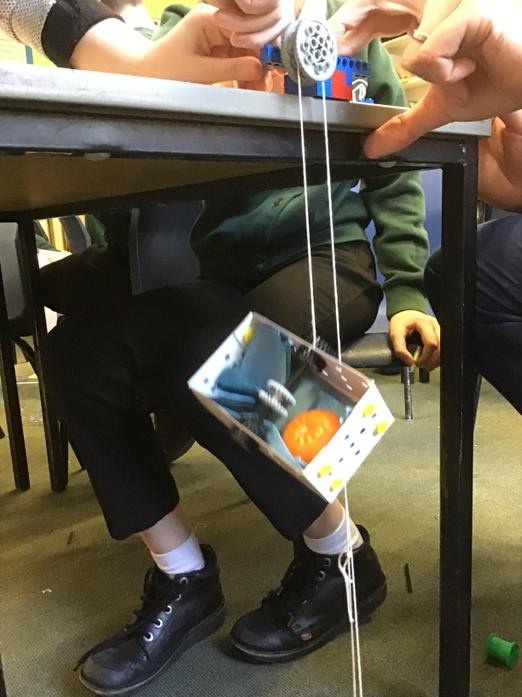 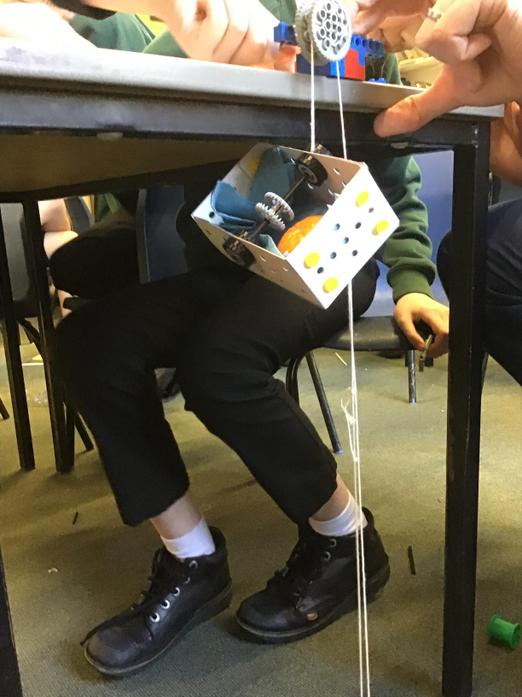 Hummingbirds have all flown back to the nest and we are glad to be back together again.

We have been creating jigsaw pieces which all fit together. On the pieces we have written about positive experiences from the period of home learning and what has made us stronger characters.

Hummingbird class had a great tribe bonding session in the wild this week, spending time working out the most waterproof design for an outdoor shelter (which came in very useful following the weather of this week!)

They had a good time thinking, designing and building in the outdoors, this was such a fantastic sight to see after so many weeks of home isolation and I think it’s fair to say we all had a brilliant afternoon back in each other’s company again.

The children were asked to think about which animal and colours represents their personality.  They used Brusho powders to create both their background and their animal and then put the two together.  The pictures are for displaying in their windows at home to form part of a nationwide public art display instigated by Anthony Gormley.

We are so proud of the work Year 6 are doing during this latest period of Home Learning and in particular for their 300 word story challenge.  Below are just a few of the many fabulous entries and I am sure you will agree that they show what a creative, talented group of writers they are.  Well done Year 6!

Investigating gears and pulleys to see how Santa’s sleigh works.

In Science this week, we have been testing the effects of air and water resistance and friction.  The children designed parachutes to see if they could drop an egg from height without it cracking. For air resistance, the children tested different shapes in a viscous liquid and timed how long the shape took to reach the bottom of the tube. They conducted a ‘fair’ test to get an average. In DT we have been investigating levers and pulleys.

Today in Forest School we had lots of fun. One group was whittling and carving objects into shapes of their choice, for example, you could have carved an owl. The other group set up 2 different assault courses. They both involved lots of mud and challenges and asteroid dodging. At the end, we had an awesome asteroid fight. The asteroids were really just balls but we still provided lots of challenges and fun for each other. This lesson involved lots of mud and fun so we can’t wait for next week.

In PE today we did gymnastics, in gymnastics we used equipment to make a course. When we made the 5 courses, we had a group on each course. We had to move in different ways on the appratas, once we have done that we moved to a different course and did that one.

Today in Science we studied what position shadows are in depending on the time of day and position of the Sun. In our lesson we used a torch as the Sun and we moved our torch around to experiment how long the shadow was. We found that the higher the Sun the shorter the shadow and the lower the sun the longer the shadow. It was a good lesson.

In Science today, we learnt about shadows and how the sun changes their postion. We represented the suns movement throughout the day by using a torch and a mannequin.

Today in English we were asked to come to the woods to look at a very mysterious object. Strangely, there was a dome covered in tin foil in the middle of some “Do not enter” tape. We were then tasked with the job of describing the scene near the metallic-looking dome. We used pathetic fallacy (weather description) to set the atmosphere and tension of the opening scene. Year 6 were very thorough in their descriptions and enjoyed the trip outside the safe haven of their classrooms.

Whittling and Weaving in the Woods

In Forest School today, we split up into groups and performed different activities throughout the woods. One group was with Mr Templar and they practiced whittling sticks for later creations. The second group was tasked with the challenge of creating an obstacle course for a relatively small ball. Finally, the third group was asked to help continue a den which had been started the previous lesson. The whole of Hummingbird Class had a lot of fun in their lesson and are eager to continue their hard efforts for Forest School.

In sience today we were showing how the moon changes it shape from a new moon to a full moon.If you didn’t know what a new moon is

gymnastics
Today, in gymnastics we have learnt how to do a sequence called cannon. When we learnt to do the sequence we made are own. In the sequence we went one after the other to preform the move that you come up with, we had to do 8-10 move in a sequence.

Year 6 have completed their local history study by producing water colour impressions of what Mellor Mill may have looked like in all its glory. They experimented with mixing shades, blending and learning to create shadow effects. What talented artists we have!

Year 6 have a Tree’mendous time in Forest school!

Hummingbird class have been busy creating team Hummingbird flags- All Hail the Hummingbirds!  We have written poems based on the song (written by Dolly Parton - of course) 'If I Had Wings' and imagined where we would fly to if that were possible!  We have also begun the topic of North America and thought about all the things we already know about this area of the world.  Hummingbirds are working hard and are enjoying our first couple of weeks back in the flow of school.
Eagle class have also been busy creating team Eagle flags - We started our work in North America and our topic for Science - Space. Eagle Class have also been working hard creating their own version of For The Birds: A Pixar Short Film, where we wrote it from one of the bird's perspective.
Top